The Home is for sale at Toscana del Este in a low-density real estate development in Costa del Este.

Therefore, you will see that commercial properties have distance from residential ones. Also, as you understand that low-density residential buildings segregating from high-density buildings.

In Costa del Este you can find all the facilities and services necessary to live without leaving the area. We see in Costa del Este the three leading supermarket chains in the country: Riba Smith, Super 99, and Rey.

Branches of major pharmacies such as Arrocha and Metro also have a presence in the community. Some prestigious schools in the country as San Agustín, and the Inter-American Academy of Panama, chose Costa del Este as their educational facilities.

Additionally, Costa del Este is the location that many world multinational companies establishments their Latin American headquarters and choosing the zone for their administrative offices.
Among other reasons of your choice are the proximity to the Tocumen International Airport and the equidistance with the Panama City Down Town through the Corredor Sur.

Also, corporate and commercial offices such as Plaza del Este, Financial Tower of Costa del Este, you can find enough spaces for your working office.

Besides, beauty salons, restaurants, clinics, and hospitals, like Pacifica Salud affiliated with John Hopkins Hospital have branches or facilities in Costa del Este. Mall, brand Hotels, and Shopping Centers such as Town Center and Atrium Mall supply the residents of the sector with all their necessities.

In the low level of the home for sale in Toscana del Este, you fin a garage door, lobby, and main entrance. Also, an entrance lobby to parking lots. Living room, dining room, large den, and spacious terrace. Also, courtesy bathroom, ample storage under the stairs, kitchen with breakfast area, and games room with toilet.

On one side are the laundry, the room, and the bathroom of the employees. Also parking for four cars under a closed roof and three in a garage door. A large tank, grocer, 3,500-gallon water tank, and sedimentation and UV filter. The House includes its pumping room.

The House for sale in Toscana del Este has four rooms, each with its bathroom and walking closet. Also on the top floor are a family room and a large linen closet.

The roof of the residence is made of tiles and has central air conditioners on both floors. Additionally, at the same level, a breakfast room, games room, and maid’s room with an air conditioner Inverter.

Until this moment, the home received the occupation permit in 2007, and it enjoys the exemption of property tax for 20 years

Apartment for rent in Waters on the Bay

Via Porras Property for sale 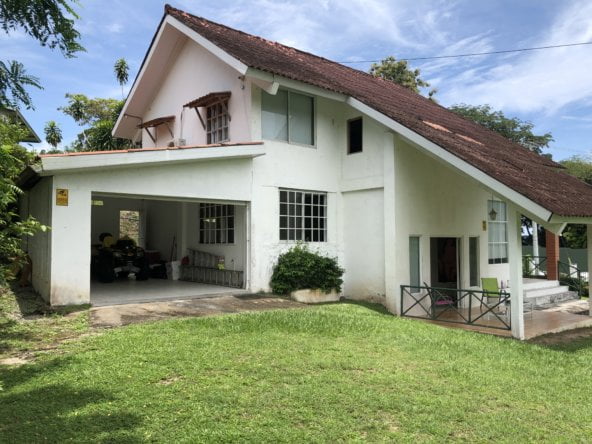