Costa del Este is the first urban development in Panama City, built on a superficies of ​​310 hectares. In its design, aspects such as zoning, feasibility, and green areas are a consideration.

In its planning, developers thought takes the maximum comfort for its residents. Its location is strategic. Also, the distance between Costa del Este and Panama City DownTown and the Tocumen International Airport is equidistant. For this reason, this makes it one of the places with the highest appreciation of real estate in Panama.

For this reason, many multinationals that operate in our country decided to establish their headquarters for L. A. in Costa del Este. In Costa del Este, we can find everything you need for the home without leaving the environment.

Most of the supermarket chains have branches in Costa del Este. For this reason, drugstores, gyms, restaurants, and schools have a presence at Costa del Este. Also, you could find cinema theaters, hotels, shopping centers, and soon the Pacifica Salud Hospital affiliated with John Hopkins Hospitals.

On Paseo del Mar, avenue Roberto Motta is the residence of the Matisse oceanview residential building. Besides, the tower’s design is for families who like the best or executives of multinationals who want to live by the sea. Also, the advantage is that is close to their workplace. Besides living and working in a safe area, and with all the necessary comforts around you. Matisse’s residences live near the main facilities of Costa del Este.

The Apartment and Building Description

PH Matisse luxury condo for sale at Costa del Este has two social areas. One of the social areas is on the sixth level with a swimming pool, a walking area, and a BBQ area. Also, space for children’s games, an open terrace. Besides a gazebo, and an event room. The second with sauna, squash court, gym, terrace, games room.

The apartment located in Costa del Este has 343M2, it is on a high floor overlooking the ocean, Panama City. 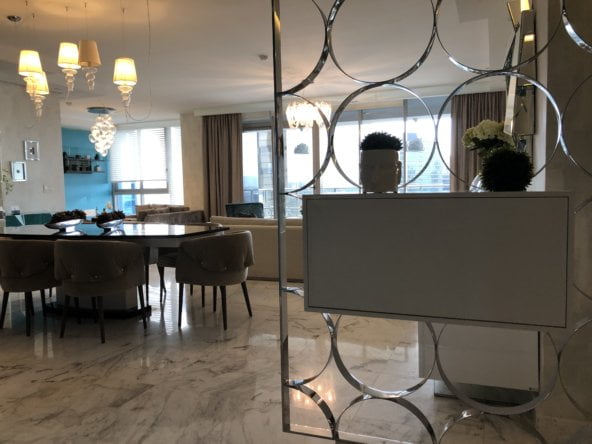